Today is the second Sunday of the Advent season, the day we light the second candle on the Advent wreath. I should be able to tell you what that candle signifies, but I can’t off the top of my head.

When I was growing up my family didn’t do anything special for Advent. Probably had something to do with being raised Baptist. However, my wife’s background is Lutheran. Advent is a part of her tradition. That is probably why I haven’t memorized which candle gets lit on which Sunday – she knows and I can just ask her.

When our children were younger we had various Advent traditions we shared as a family. There were certain German delicacies that were only for the Sundays of Advent. Cakes, cookies and various other sweet things, none of which particularly appeal to me. The tree went up for the first Sunday of Advent, with everyone helping get it up and decorated (and in recent years keeping the cat out of it).

One of the Advent traditions is the Nativity set. Our first one we purchased in Liberia, and has a definite African flair to it. In Ottawa we have a second one we inherited from my wife’s mother. You’ve seen them: a manger scene, with shepherds, animals, a baby in a manger and some wise men. It is a three dimensional representation of the Christmas story.

Last Sunday, the first of Advent 2017, we had the privilege to visit Vivian’s aunt and help her put up her Nativity set. I’m not sure if she actually remembers when it was purchased (she was very young at the time) but she told me it was bought in 1925, and has been on display in the family home every Advent since then. That is quite the tradition. I thought I’d share some photos with you. 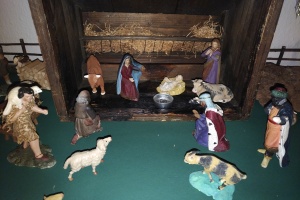 This is a season of tradition. I have been listening to a lot of Christmas music the past week or so. It isn’t ubiquitous in our small town the way it is in North America. There is no mall here with its Muzak, no chain stores playing Christmas music as soon as Halloween ends. Which means I am not tired of it the way I normally am at this time of year.

That’s a good thing. Overexposure to anything can reduce its impact. Christmas music, real Christmas music, not “Jingle Bells” and “Frosty the Snowman,” tells the story of a miracle birth that is as important today as the day it took place.

It is a message of love and hope, something there is far too little of these days. Next time you hear a traditional Christmas carol, instead of filtering it out as background noise, take a good listen to the lyrics. You’ll feel better for it. Even if you don’t believe.

If you listen closely though, you might want to consider the Truth of those words. Because Christmas is just the prelude. What follows is even more important. How you react will impact your life, though most people don’t understand the importance of the message. I hope you do.