Did You Know It’s Voting Day?

They go to the polls in northern Iraq today, the area residents call Kurdistan. By the time you read this the results may be known. No matter the outcome it is a political problem, not only for the central government in Baghdad but for the rest of the world.

I have been to Iraq a couple of times and have a little bit of understanding of the aspirations of the Kurdish people, who supposedly are the largest ethnic group in the world without their own country. Promises were made and broken a century ago at the close of the First World War. Now the regional government of three Iraqi provinces wants to change that.

We won’t get into the political pros and cons. As someone who has lived through independence referenda in Canada, where citizens of the province of Quebec have twice been asked if they preferred to be part of a new independent nation, I think I have some idea of the tensions in Iraq today. It is complicated, no matter which way the vote goes. (No predictions from me here – ask me privately if you are curious.)

More most of us, Iraq is just a place on the television news – we would be hard-pressed to find it on a map. But given that it is in the news so much, it is not bad to learn more about it.

Ayub Nuri is an Iraqi journalist, ethnically a Kurd, who has penned an autobiography more or less timed to coincide with the referendum. Being Kurdish in a Hostile World is an interesting snapshot of life for the Kurds over the past 30 or so years both during the reign of Saddam Hussein and afterward. 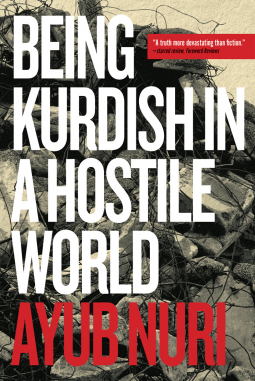 It’s an easy read, which is always a plus. Nuri brings home the reality that there is an entire generation of Iraqis who really don’t have much experience with peace – there has always been war in their country. I remember reading (in the late 1980s) that the Iran-Iraq war (1980-88) had received little attention here, but more than a million people had died. It wasn’t our fight, so politicians and people alike ignored what was going on so far away.

The idea of Being Kurdish in a Hostile World is to provide background, to make the reader sympathetic with the Kurds and their desire for a homeland. Nuri manages that nicely, with his description of chemical weapons attacks and the other struggles his family and his people have faced. There probably is another side to the Kurdish story, a less flattering side, but you won’t find it here.

You have probably heard it said that if you want to understand someone you need to walk a mile in his shoes. Or words to that effect. Being Kurdish in a Hostile World allows you to do that. An impartial observer might not agree with all the historical interpretations that always reflect the Kurds in the best light, but Nuri never claims to be impartial.

Despite having been to the region, I will admit I only had a cursory knowledge of many of the recent historical events that have shaped the culture and the region. I am better informed than I was before I read the book, and I enjoyed the learning experience. What more could you ask for?

“Book has been provided courtesy of University of Regina Press”

← Not Taking The Bus
Kenya Safari I →