I have to admit, I was tempted to reject this book when I read the first line. But that would have been silly. So I read the whole thing. 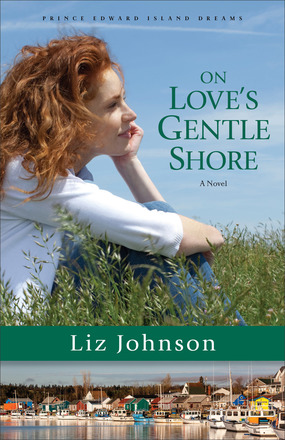 Liz Johnson, according to the blurb on the book’s cover, fell in love with Prince Edward Island on her first visit. I guess love is blind, because she doesn’t seem, to know that “Island,” should be capitalized, something which infuriated me all through On Love’s Gentle Shore.

Okay, it wouldn’t be fair to reject the novel because “island” is in lower case throughout. Certainly she didn’t consult any style guides. It is a proper name, it is always capitalized. You would think someone who loved the Island would know that.

Though I am not a romance fan, I was looking forward to this one. I hadn’t heard of the Prince Edward Island Dreams series, of which I believe this is the final installment, but I am a huge fan of L.M. Montgomery’s work, also set in PEI. Johnson must be too – she gave her heroine red hair, as a tribute I assume to Montgomery’s Anne. Pity she didn’t give her Anne’s brains also.

I didn’t find that there was much to set the locale as being distinctly Prince Edward Island, or maybe that is ignorance o my part. To me the characters aren’t recognizably Islanders. They could have been pretty much any rural North American location. Okay, there is a little bit of local colour, places are named (such as the Confederation Trail) but not visited. It feels a little contrived to me. Lots of “island” and no ocean. Maybe I was annoyed that they apparently celebrate Canada Day (July 1) five weeks into the summer. Maybe that is why Johnson mentions the day but not the date – Canadians think of Canada Day as  the beginning of summer. But that is just nit picking on my part and really isn’t relevant to the tale being told.

So what about the story? Well, the path to true love never runs smoothly. That’s what makes romance novels work. The central characters in this book though come across as contrived; there is no depth to their character. I’d say there were stupid people, but my wife doesn’t like me calling anyone stupid, not even fictional characters.

Are there really people as clueless as Natalie, who agrees with her fiancé’s idea of spending six weeks of wedding preparation on PEI, when she really never wants to see the place again? What sort of life dos she envision having with him when she has basically withheld any information about her life before meeting him? And how clueless is Russell, who can’t seem to see her discomfort and thinks nothing of abandoning her to the care and company of her childhood sweetheart while he heads back to Nashville to work? I won’t even talk about Justin, who apparently made no attempt to find the love of his life when she fled the Island all those years ago.

For any novel to work, but especially for a romance, there must be some sort of identification with the characters. I couldn’t develop that. I just wanted to abandon them to their fate, as predictable as it was.

Maybe if you are a fan of implausible romances you will like this one. I felt my intelligence was being insulted. I think I have sworn off romance novels for the next little while.