Ottawa is honouring Daniel Alfredsson, the retired captain of the Ottawa Senators hockey team, with a special ceremony today retiring the sweater number he wore for 17 seasons. The game is expected to be a sellout.

Alfie holds a lot of team records, for goals and assists among others. He was a bona fide superstar hockey player; an unlikely superstar given that he was selected in the sixth round of the annual draft. He won the city’s heart for his grit, determination and hockey skills – but also for his strength of character and unselfish giving back to the community. He has been the poster boy for mental health awareness (literally) and given his time and energy to other worthy causes. 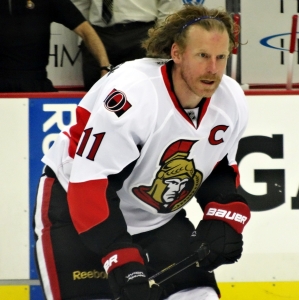 It’s a big deal here. I wasn’t planning on attending, but I did look at ticket prices and the club is using the occasion to make some extra profit. The cheap seats, which usually run about $35 are $125 for this event. That solidified my decision to not attend. I’m not a big fan of price gouging (though I am in sympathy with charging what the market will bear, so I feel a little conflicted in this occasion).

Alfie never managed to lead the team to the Stanley Cup, but it wasn’t for lack of trying.  Some years they got close, and during most of his time with the team they were contenders.

Character is a word sometimes over-used in the sporting world. I saw Alfie exhibit true grace and strength of character though, at a game I attended in (I think) 2008.

It was the final game of the season, the last game of the playoffs that year, for Ottawa. They were eliminated in four games by the Pittsburgh Penguins.

It hadn’t been a great series for the team. As a fan I may be a bit prejudiced, but it seemed to me like the officiating, if not biased against Ottawa, was at least spotty. Especially in that last game which I attended. I felt the referees seemed determined to ensure a Pittsburgh victory – it did not appear the calls were being made fairly.

Which made what happened after the game much more meaningful for me. I don’t know if the television cameras caught it.

At the conclusion of the game the teams lined up as they always do, for the traditional handshake. It’s a perfunctory thing that no-one pays much attention to. Alfie took it a bit further.

After shaking hands with the other team, he skated across the rink and shook hands with the referees and linesmen. Given that the officiating had played a big role in the loss, I thought that showed true character. It’s a fast sport and the officials usually are pretty good at making the right call. When they get it wrong, that can cost the players (and the ownership).

As a fan I felt the officials had cost Alfie’ team the game. No-one would have noticed if he had skated directly to the locker room after the team handshakes. I was very impressed at his courtesy and character in extending his hand to those who had cost his team the game.

Alfie is retired now, but his legacy continues. Being gracious when you are winning is easy. I hope those players who follow him can learn from his example and show true character when they lose.