The 2015 RBC Ottawa Bluesfest is now over. I promised some impressions, but it seemed like during the festival there was never time to do more than jot down a few notes. Time to get caught up, with some mini-reviews of the artists I had a chance to see (or at least hear) perform.

Interpol: I wanted to see these guys because I know they have toured with U2. I have seen a number of bands that have opened for U2 and get the impression that they have been carefully chosen. So I decided to check them out.

I was late arriving, so I heard then from the distance as I approached the festival site, I didn’t get close up to the stage. What I heard sounded okay – but didn’t have me wishing I had heard the entire set. I do recognize though that experiencing live music is very subjective. Maybe I would have appreciated them more on a different night in a different venue. I find that I prefer my first experience with a band to be indoors.

Air Supply. They were there, I was there, so I listened. I didn’t particularly care for them in the 80s – and they did nothing to change that opinion. Nostalgia is a funny thing. I recognized a fair number of radio hits when they played them, but don’t remember ever having to play those songs back when I was a radio disc jockey. Air Supply are very good at what they do – but I still wasn’t touched emotionally. Ten minutes after the set finished I couldn’t have named any of the songs they played.

Maybe it was a lack of affinity on my part for soft rock in general. When I go to church (almost every church it seems) the drummer is behind a Plexiglas cage that reduces the volume for the congregation. I understand that for a worship service context where there are frequently people who don’t like loud music. But at an open-air festival? Air Supply’s drummer was playing behind Plexiglas, which just seemed wrong to me. 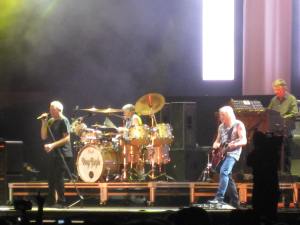 Deep Purple: One of the reasons I decided to buy a full festival passport was because I wanted to see this band. I had never seen them before, and I can’t remember why I passed up on previous appearances. It’s dinosaur rock – but I do have a streak of dinosaur about me.

They put on an excellent set, showcasing the musical depth of the players. No three-minute pop songs here, log solos stretched the pieces out well over the 10 minute mark, maybe even to 15, I wasn’t timing them. 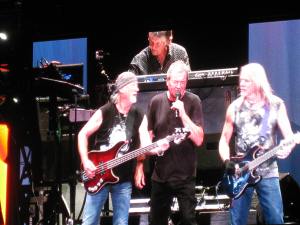 Deep Purple have of course undergone many lineup changes over the past four decades. This is not the same band I first became aware of in 1970, but it is close enough – there are three original members still touring with the group. And one of the new members is Steve Morse, who I remember favourably from his time with the Dixie Dregs (and post-Kerry Livgren Kansas) back in the 1980s.

As someone who has dabbled in guitar from time to time, it was a real treat to see Steve Morse spread his wings and take flight. His solos were things of beauty – he truly is a guitar virtuoso.

They played the obligatory hits, songs like “Space Truckin’,” “Hush” and, of course, “Smoke on the Water.” They sounded like a band having fun, not one going through the motions. I thoroughly enjoyed their set.

← What If Orange Was A Swear Word?
Sand Castles →