Wandering through downtown Basel, Switzerland, I came across this sculpture of the Roman god Janus.

I was struck by the skill involved in creating something that intricate that presents two completely different faces to the world. What you see depends on which side of the statue you are looking at.

Janus was the god of gates and doors, and of time, including beginnings and endings. He allegedly has a month named after him – January – though some dispute that.

This sculpture shows Janus looking both forward and backward, though I am not sure which side is which. I presume the younger face is the one facing forward. Though sometimes it seems the past and the future look a lot alike, and maybe that was in the sculptor’s mind.

By this point in January you probably aren’t looking back much at 2019. After all, you can’t change the past, for good or for ill. So there’s no point in dwelling there.

Janus can look back all he wants, but getting stuck there, as tempting as it can be at times, shouldn’t really an option. As 2020 unfolds, let us all look forward. 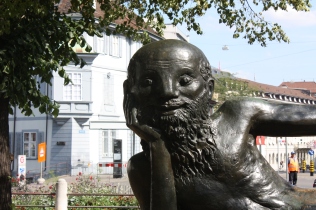