Behind The Red Rope

There’s something scary out there. Go beyond the community boundaries and something bad is sure to happen. Only inside the red rope is there safety. 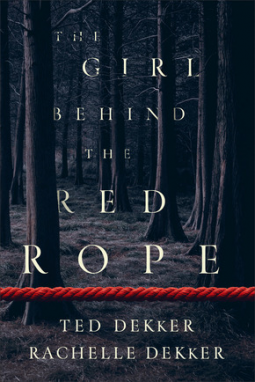 Thriller writer Ted Dekker teams up with his daughter Rachelle for the dystopian novel The Girl Behind the Red Rope, which may remind you of something you remember reading in the news. You know, the story about the religious group who follow a charismatic leader as they withdraw from society to avoid a coming cataclysm which only they will survive.

We all know how that turns out in real life (see Jonestown). But what if the danger is real? What if there is evil lurking just beyond the community?

Grace has grown up in Haven Valley. Her parents split up as her father was unable to accept the revelation of impending doom. Grace, her older brother and her mother have lived in this closed community for more than a decade. There is an acceptance of the situation – they know they are part of the chosen, the protected ones. Grace accepts an arranged marriage with a much older man; how can this not be God’s will?

Then her brother tells her he wants to see what is outside Haven Valley. Is there truly danger, or have they been deceived? Will Grace help him see if the outside world is as dangerous as advertised? What will be the consequences if they are caught? Worse, what will happen if there really are evil spiritual creatures lurking just beyond the boundaries?

The Dekkers have managed to write a compelling tale (I didn’t want to put it down) that at the same time asks the reader to think. If they want to that is.

What are the limits of religious leadership? How do you discern what is valid religious expression and what is just insane? What rights do parents have when it comes to religious instruction? What about the rights of children? How can scripture be twisted to justify acts that are on the surface the opposite of what it says?

When Grace’s father decides he needs to be reunited with his children and sets out to find Haven Valley, he sets into motion a string of events that brings into question the assumptions of the community. Is he a threat to their existence, or does he bring liberation from oppression? Will Grace’s mother protect her from community punishment, even if it could cost her life?

The Girl Behind the Red Rope manages to incorporate a large amount of Christian theology without being preachy. Those trying to categorize it would probably refer to it as Christian fiction, but that strikes me as a convenient tag. Those of other faiths or no faith would still find this to be a fun read.

You only have to think about the bigger picture if you want to.

← Visions of Sunrise
A Thanksgiving Prayer →