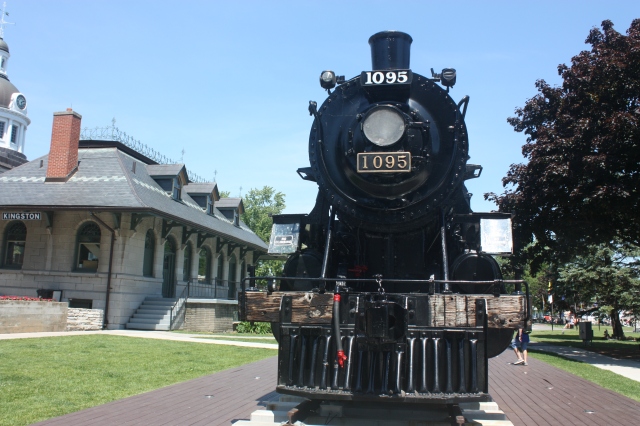 I remember steam engines, though only in a hazy way. They were on the way out when I was born, replaced by the more efficient (and I presume cheaper to operate) diesel locomotives.

Newer trains though don’t have the majesty of a steam engine. There was something special about that technology, something that captured your imagination, taking it to new heights.

Those 19th century trains have their own mythology, both in the United States and Canada. Trains opened the American west. In Canada the railroad was used as an instrument of national unity, of population growth. It gave us our first major political scandal.

This steam locomotive, Engine 1095, is on display at the waterfront in downtown Kingston, Ontario. The engine was built by the Canadian Locomotive Company in Kingston in 1913, so the city has it as an appropriate tribute to the community’s industrial heritage.

I have seen this locomotive on display during recent visits to Kingston, but have realized I may have seen it before that. The engine  was in service for 47 years, until 1960. It ended its “career” in Montreal. Given that I was living in that city back then, I suppose it is possible I watched in in action, hauling freight or maybe pulling passenger cars to the rail yards. There is no way to know for sure, but it makes for a pleasant thought.