Temple of the Shoe Goddess

When I was in university, one of my classmates had a party that established her reputation for the rest of the year.

In the hallway of her apartment, on display for all to see, were her shoes. Forty-five pairs of them. 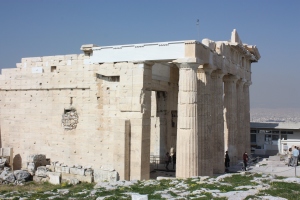 It was only a few months after Imelda Marcos, wife of the Philippine president, had been revealed as having more than a thousand pairs of shoes. Naturally, for the rest of the year we referred to our classmate as Imelda.

Nobody would ever call me that. At any given time, I usually only have two pairs of shoes – running/walking shoes and a pair of rarely used dress shoes.

I realize that puts me in the minority, in the west anyway. In Greece though, I was surprised to discover a temple dedicated to the goddess of running shoes. Who even knew that more than 2,000 years ago they had running shoes in Athens? I always thought those famous runners who created the marathon ran barefoot.

There it was though, on top of the Acropolis, Athens’ highest hill: the Temple of Athena Nike. It dates back more than two millennia, which in part explains its disrepair. There aren’t many devotees of Athena around these days, not enough donations coming in to keep a roof on the place. 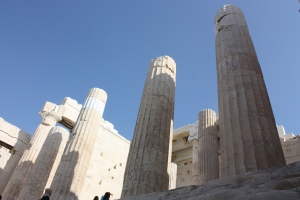 Athena, I knew, was the ancient Greek goddess of wisdom. Turns out she had different incarnations, something I don’t remember learning when I studied Greek mythology in public school. So, I looked it up. Athena Nike was more of a warrior goddess, as Nike is Greek for ‘victory.’

So how does that tie in with the world’s biggest running shoe manufacturer? I really have no idea. I figure someone knew ‘Nike’ was Greek for victory and thought it an appropriate image for a shoe company. I have no idea if the Athena connection is part of the shoe company’s corporate history. 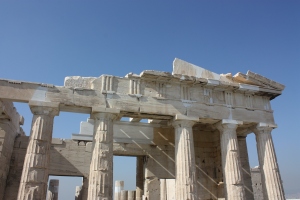 The tourists come by the millions to the Acropolis each year.  It is a completely uncommercial tourist site. I guess the Greek government has decided that corporate sponsorship of their cultural heritage would be a little tacky.

So, you won’t find the Nike swoosh adorning the temple of Athena Nike, though I suspect the people at Nike have probably tried more than once to cut a deal.

I guess some things just aren’t for sale.

← Saturday Already
Racing For The Bottom →