The national cemetery in the hills above Sigolsheim, France, contains the remains of several thousand soldiers who died in the Battle of Colmar which ended on February 9, 1945. The tombstones are a sobering sight. 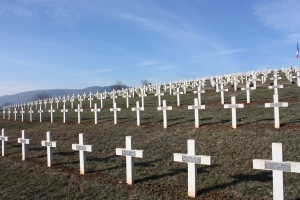 I have been to Canadian war memorials in Belgium and France, so standing on this hill is not the first time I have contemplated death and war. But there is something different about this cemetery, and at first I couldn’t figure out what it was. Then it clicked.

Each tombstone has a name, a regiment and a date of death. But there is no date of birth listed.

One of the things that struck me most when I visited Belgium was how young were those who died in the First Word War battles; teenagers many of them. The Canadian and Commonwealth graves all gave the birth dates of the soldiers, as well as when they died. You cannot help but be moved by row upon row of youth cut down in their prime.

In Sigolsheim you get a sense of loss, just from the number of the graves that take up the side of the hill overlooking the town. But it didn’t give me that same feeling of wasted potential, of wondering what this boy or that young man would have become if not for the war. For me anyway, not seeing the ages of the dead blunts the impact. 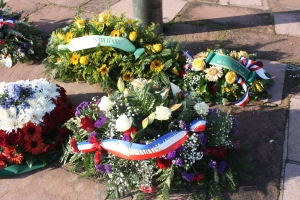 War has changed, at least in part of the world. So much has become technological. For many countries, modern war is more a video game, with drones and bombers. The enemy isn’t completely real when you don’t see the blood. The moral choices are blunted when you aren’t facing return fire.

For most of these young French men the battle against tyranny was probably pretty clear. Their country had been invaded and occupied. Now they had the opportunity to once more live in freedom.

Seventy-four years ago today the battle raged in the hills above Colmar and Sigolsheim and in the streets of the towns. Today there is peace, and the residents remember those who fought for their freedom.

← Fighting For Colmar – I
Another Anniversary →