My plan was not to read this book. I had read enough reviews to know pretty much everything in it, there would be nothing new.

However, as a political junkie it was just too irresistible. Fire and Fury has left me thinking not about the chaos that is the Trump White House but more about the nature of journalism. 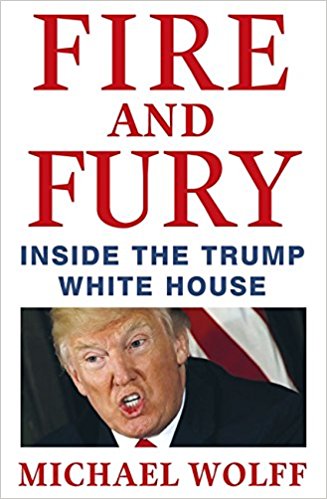 To anyone with any political savvy, it was obvious from the outset that Donald Trump was not temperamentally suited to being President of the United States, and that those he gathered around him were unlikely to be able to bring an acceptable level of professionalism to their jobs. That pretty much sums up the book, and Trump’s presidency.

That being said, and as much as I dislike many Trump policies, I was not overly impressed with Michael Wolff’s “fly on the wall” behind-the scenes tell-all account of the early days of the Trump White House.

My biggest quibble is with the decision to keep his sources anonymous. I realize that many of the people he relied on for his information would have been reluctant to speak on the record criticizing the president and his advisors. Politics can be a dirty game and politicians are human – there might be pushback and retribution against those willing to criticize him.

Despite that, I think names are important. If you aren’t willing to stand behind your words, but instead hide behind a cloak of anonymity, always off the record, those words must be taken with a considerable grain of salt.

If I don’t know your name, how can I judge your motives? When a congressman speaks on the record, I can at least evaluate those words, using what I know about him or her, their record and party affiliations. In Fire and Fury, I don’t know who is leveling the criticisms. Is it disaffected Republicans? Fired staffers? The CIA? Democratic presidential hopefuls? Trump’s ex-wives?

Too often in politics (and in journalism) I have seen people with an obvious agenda try to hide their identities so that they could not be held responsible for their opinions or their actions.  I don’t know if that is the case here – but I can’t say it isn’t either. The book is basically backstairs gossip, mostly unsubstantiated. It’s a best seller, obviously many people like it.

Unfortunately, it is extremely superficial. There is no attempt at analysis, no placing of events in the context of history or political thought. If the idea was a quick book on the beginnings of the Trump presidency then Fire and Fury succeeds merely by being published. If you want to know “why” more than you want to know “what,” it is a big disappointment.

I’m glad I opted for the public library for this one – I don’t think I would have found it good value for money.