There must be some sort of special devotion that causes a person to choose a monastic life. Part of me wishes I had that kind of faith. Though I would probably miss my creature comforts.

When I look at the cliff that is Rabban Hormizd Monastery I image what it must have been like for the 7th century monk who founded this place. It was a retreat from the world, a place where the monks could focus on God. The spectacular view is a reminder of the beauty of God’s creation. I think we can all use a place like that, where we can escape, at least temporarily, from our everyday routines and commune with the creator.

Life certainly wouldn’t have been easy here when the monastery was founded, but nevertheless people came to this place to draw closer to God. Each monk would carve his own cell out of the side of the cliff where he would sleep, and frequently another spot where he would go to pray. At least that is what I understood from our guide. The men would eat communally, but prayer was an individual thing for the most part, one on one with God. I suspect a lot of that time was spent listening, which has become somewhat of a lost art. In the 21st century we have no problems telling God what we want. Listening for the voice of God, waiting to hear if He wants to tell us something specific, doesn’t fit in with the pace of our post-modern society. We want instant gratification, not contemplation. 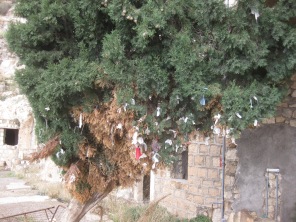 Pilgrims leave their prayers at the monastery, written on strips of cloth and tied to a tree. 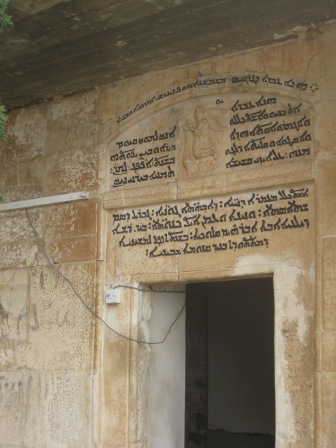 It was in this room that Ottoman soldiers slaughtered the monks of Rabban Hormizd Monastery. 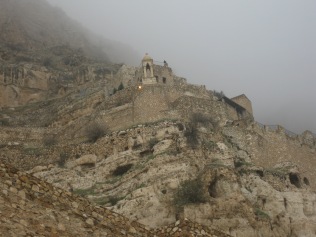 Once this place was the seat of the Patriarchs of the Assyrian Church. The Chaldean Catholic Church traces its roots to this monastery. But security was always an issue in this land of militant Islam. Our guide showed us one room where all the monks but one had been slaughtered by soldiers of the Ottoman Empire. He didn’t mention a date and I didn’t think to ask, forgetting that the Ottomans were around for 600 year or so.

Today there are no monks carving new living quarters in the hill; the order has a new monastery not far from here (new is a relative term – it was constructed in 1859). With ISIS in control only 20 kilometres or so away, few people are making the pilgrimage to this site. Yet there are signs that Christian faithful are still coming, in small numbers anyway. A couple of the trees have pieces of cloth tied to them, prayers written out and left behind by people who have visited this place.

I don’t know what the prayers are about. Even were I to unwrap one I don’t read Chaldean. But they are a testament of faith, and a statement of trust in the God who answers prayer, even in this land of conflict.