One of the things I enjoy about vacation is just wandering around the community I visit. No set agenda, no plans to see any particular sight or building; just soak in the sights and sounds of the city.

When doing that I occasionally notice things that aren’t in the guide books that intrigue me. A couple of wall plaques in York fell into that category. The first one was a memorial to Miles Coverdale. 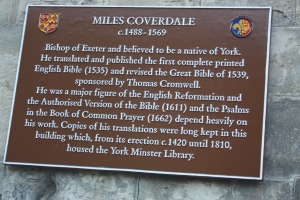 I learned more about Miles Coverdale from this plaque than I knew before.

I knew his name from history, though I probably wouldn’t have been able to tell you anything about him, I just knew he was an English Christian leader sometime around the 16th century. I learned more than I knew before just by pausing to read the plaque on the wall as I was rambling through the historic downtown.

From reading that, I can imagine what a huge influence Coverdale has had on English history. Records from that era may be a bit sketchy, which is why, I presume, the plaque says he is “believed to be” a native of York. When I think of English translations of the Bible before the 1611 King James Version the name that first comes to mind is Wycliffe. That may be because John Wycliffe was a pioneer, the first to translate the Bible into English – but he lived before the invention of the printing press, so his work wasn’t that widely distributed. Coverdale was the first of the printing press era.

The plaque commemorating the Methodist meeting house was amusing in a way. It reminded me of directions a friend once gave me to get to a party: “Turn left where the white house used to be.” Not very useful if you were new to the area and didn’t know what corner the white house had been on before burning down a decade earlier.

The room is no longer here – but their influence is still felt today.

The meeting room where the Wesley brothers and George Whitehead preached isn’t there anymore, but the building still exists. I think it speaks to the influence of the Wesleyan movement on the British Isles that the plaque is there to mark a room that hasn’t been there since the late 19th century, a room in which the Methodists only met for six years.

Signs like these get me thinking about the past, about our Christian heritage. Society has increasingly moved to being more post-Christian than Christian. Those markers are an important reminder of where we have been and who we once were. I think a lot about the past, but I have no desire to live there. However I do believe we all could use a little more awareness of how we got to where we are.

Which has me wondering: what sort of plaques we will be putting on the sides of buildings in years to come? Who will we find to be worth commemorating? In a post-Christian society it won’t be religious leaders. Will it be politicians, actors, or sports heroes? Probably not doctors or educators, not that they aren’t deserving. I see them as usually being underappreciated.

The names I saw on those plaques in York make a statement about society. What do we want to say next?

← Too Good To Be True
Searching For Dracula – II →