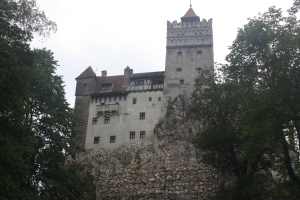 Dracula is everywhere in Romania, perhaps the country’s biggest tourist draw. But a flawed one that many Romanians are ambivalent about. Tourist cash is welcome, but I got the impression that vampires are not a favorite topic.

Irish novelist Bram Stoker had never been to Romania when he set his 1897 vampire novel Dracula in Transylvania. In those pre-Internet days novelists didn’t have to worry all that much about accuracy. Stoker may or may not have seen pictures or heard descriptions of what the country was like, but it didn’t matter since his readers were likely to be no better informed.

The fact that Dracula was a fictional creation does not seem to have sunk in with everyone. On our trip to “Dracula’s Castle” our guide told of one tourist who felt it was his destiny to come to Romania to kill vampires – and he wasn’t going to be satisfied until he had done so. Needless to say he left rather disappointed – it seems all the vampires have moved to Wilno.

So why Transylvania? There was a “Dracula” but he wasn’t a vampire. In the 15th century Vlad Tepes (the Impaler), was the prince of Wallachia, one of the areas now part of modern-day Romania. He was of the House of Dracul, the dragon, which is where the Dracula name comes from. History suggested he was a warlike and bloodthirsty ruler, but in Romania he is remembered as someone who stood up for his people. He did have the habit of dealing with his enemies by impaling them on stakes, thousands of them. That is a far cry from a vampire bite on the neck, but Stoker borrowed the Dracul name and took some poetic license. Who was going to notice in 1897? And it is a novel after all.

Which brings us to Bran Castle, commonly referred to as “Dracula’s Castle,” and the destination for thousands of tourists. Technically this isn’t Dracula’s castle, it wasn’t even Vlad’s castle, though it is the right vintage and he was supposedly imprisoned there for a couple of months. But Romania needed a castle for Dracula – tourist dollars are important and there are certain expectations. Bran is the right age to be Dracula’s castle, and looks like Bram Stoker’s description, but I found the castle’s interior a little disappointing. That may be because we visited it immediately after Peles Castle (subject of a future post), home of Romania’s first king, which is lavishly furnished throughout. Bran Castle was looted, for lack of a better word, by the Communists following the Second World War and today’s contents are donations, for the most part not original to the building. Somehow it didn’t seem the same to me.

That doesn’t mean I didn’t enjoy the visit. There are connections to Romania’s royal family and enough intriguing artifacts to keep me satisfied. There are also a couple of rooms given over to Vlad and the Dracula legend.
We all need something to believe in. Scholars see myths and legends from a foundational perspective, stories that tell truths about who we are and how we got this way, even what we will become. The Dracula story is not yet myth, too new to really have soaked its way into our collective psyche as anything but fiction. Those who are aware of the once upon a time existence of Vlad Tepes know just how different his life was from that of Bram Stoker’s creation. Myth or not, Stoker does remind us that that there really are dangers just out there. Perhaps Vlad’s story is a reminder that the dangers aren’t necessarily as deadly as some people make them out to be. Cruel tyrants have their supporters – things aren’t always as black and white as we would like. 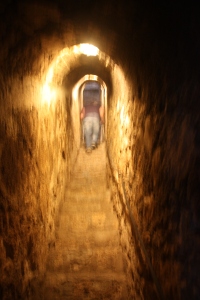 A narrow passageway inside the castle.